Back to Miss Nisbet of Dirleton

MISS NISBET OF DIRLETON. Scottish, Reel. A Mixolydian (most versions): A Dorain (Lowe): G Mixolydian (Surenne). Standard tuning (fiddle). AB (Surenne): AAB (Athole, Collinson, Gow, Lowe, Skye): AABB' (Kerr). A double tonic melody composed by Nathaniel Gow, the piece features "a rather self conscious show of modulatory dexterity and cleverness" (Collinson, 1966). The tune is dedicated to, Mary (1778-1855), the daughter of William Hamilton Nisbet (1747-1822) and Mary (nee Manners) Nisbet of Dirleton. Nisbet was an East Lothian laird and amateur musician who was a member of the Edinburgh Musical Society for much of his life (Johnson, 1984). Daughter Mary became Mrs. Hamilton Nisbet Ferguson of Raith, previously countess of Elgin, and heiress to Dirleton, but was the last of the line. Dirleton is an ancient castle and estate in Haddington, Lothian and Tweeddale, and the Nisbet family, through a series of inheritances were immensely rich and powerful. They were not, however, ennobled primarily due to their staunch Jacobite history. Stephen Bunyan has written a sketch of her, “Two ladies of Dirleton” (1995), and says of Mary:

Mary was obviously brought up as the centre of a devoted family. She was certainly indulged, but at the same time clearly stood in awe of her mother. She comes through in Mary’s letter’s as a woman of strong views, but there is a directness and frankness in the letters which demonstrates a close relationship between mother and daughter. Mary’s affection for her father also shows, not least in her tendency to refer to him by the nickname Sir Philip O’Kettle…By 1789 she had grown into an attractive woman of twenty-one, dark, lively and with a shapely figure. She played the pianoforte, loved reels, played whist and read novels. She was the centre of attraction in Edinburgh society. We can readily believe it: apart from the lively disposition, the idea of which is supported by a glance at portraits of her, she had the enormous attraction of being the heiress to vast wealth…. 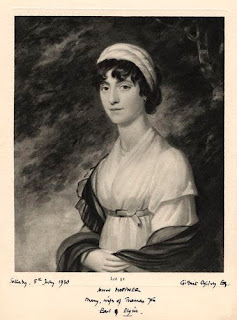 In 1799, Mary married Thomas, 7th Earl of Elgin and 11th of Kincardine (see "Earl of Elgin (1)”). He was of an ancient family, a member of the House of Lords, but relatively diminished in lands and wealth. Eglin’s career prospered and he became the ambassador to the Ottoman Empire of Turkey. While there they managed to retrieve the famous sculptured marbles which bear the Elgin name from the Acropolis in Athens, prevailing upon the Royal Navy to transport them home as ballast. The couple was caught up in the upheavals of the Napoleonic wars, however, and Elgin was detained, then imprisoned by the French. Mary worked for his release during the course of which she became involved with Robert Ferguson (1777-1846) of Raith, who was also helping to secure Elgin’s freedom. Tragically for all, Mary and Robert feel in love and began a long affair. Perhaps in part because Elgin suffered from an ailment that was described as rheumatism but which was almost certainly syphilis. This malady caused disfigurement of his face, and made him the target of cruel jokes. After Elgin was released in 1806 the triangle came to a head, with the result that Elgin left and sued for divorce on the grounds of adultry, forbidding her the couple’s children. See the note for “Tail Todle/Tail Toddle” for more on Nisbet.

Back to Miss Nisbet of Dirleton