Back to Miss Oswald of Auchincruive[edit]

MISS OSWALD OF AUCHINCRUIVE. Scottish, Slow Quickstep (March). A Minor. Standard tuning (fiddle). AAB. Composed by Nathaniel Gow (1763-1831). Auchincruive is an estate in the parish of St. Quivox, Ayrshire. During the Gows’ time it was held by Richard Oswald, a London merchant and negotiator with the Americans at the close of the War for Independence. His trading empire included a majority interest in a slaving factory on Bance Island in the mouth of the River Sierra Leone. Upon his death in 1784 it passed to his widow, then his son, Richard Alexander Oswald (1771-1841), who had been a government contractor during the same conflict. His wife, Lucy (Louisa) Oswald (d. 1797), whom he married in 1793, was a celebrated beauty. They had a son and daughter, the latter named Mary-Hester, who married in 1818. It is perhaps to her this tune is dedicated. 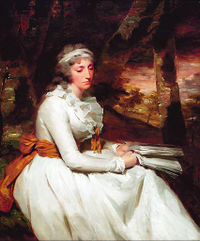 Back to Miss Oswald of Auchincruive[edit]