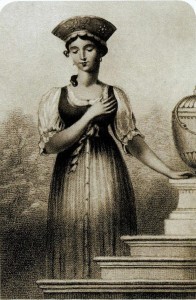 This handsome young lady was the daughter of the famous Count Platoff [, Matvei (1751-1818)], Hetman of the Cossacks, very popular in this country in Napoleonic days, for he was one of the most implacable enemies of the French. During the disastrous retreat from Moscow he did fearful execution in the ranks of the French army with his twenty regiments of Cossacks; and so great was his hatred of the Emporer that he offered to give his daughter in marriage, together with a fortune of 200,000 roubles, to whoever would capture and bring the little Corsican to him, alive or dead. In order to encourage competition this portrait was circulated with the proclamation, and no doubt there were many competitors in the field, though none of them succeeded in winning the prize. At a public dinner in Edinburgh at the time the Lord Provost toasted this lady in the following words: "Miss Platoff, the fair Cossack, and her patriotic father. May she soon be blessed with a deserving husband, that both she and the nations of Europe may rejoice. The toast created a sensation, and was followed by a burst of applause from the assembled guests.

The melody was issued by Nathaniel Gow's publishing house, Gow & Shepherd, in a folio entitled Miss Platoff's Wedding. To which are added the favourite Dances of 1813, as performed at his Annual Ball George Street Assembly Rooms, the 9th of March (Edinburgh, 1813). Miss Platoff was subsequently featured in satirical prints ("Cossack Sports--or, the Platoff Hunt") , and the incident crept into verse:

But, take care, Master Nap, you meet with no trap,
To poke either leg, or your head in;
Loss of legs stops your flight, lose your head, why the sight
Will be welcome at Miss Platoff's wedding.