MISS PONSONBY'S REEL. Irish, Reel (cut time). G Minor. Standard tuning (fiddle). AAB. "Miss Ponsonby's Reel" appears in Cooke’s Selection of the Present Favorite Country Dances (Dublin, 1796), a volume issued by Bartlett Cooke, "a musician, music seller and publisher, and an arranger specializing in Irish melodies, in collaboration with professional dancing masters such as the named ‘Mr Fontaine’ and ‘Tracy’. Cooke was an oboeist during [the late 18th century] in the Dublin theater orchestras of Smock Alley and Crow St; he also had a music shop on Sackville St (now O’Connell St) from c. 1794 to 1798" (ITMA [1]). 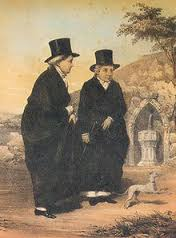 The Ladies of Llangollen

The most famous 'Miss Ponsonby' of the era was Irish-born Sarah Ponsonby, of the family of the Earls of Bessborough. She 'eloped' at age 21 around the year 1776 with her friend, Lady Eleanor Butler of Kilkenny Castle, and settled in the picturesque Vale of Llangollen, Wales, along with an Irish maid named Mary Carryl. Lady Butler was the daughter of the Earl of Ormond, while Sarah was the grandaughter of a general killed by a cannonball at Fontenoy. The pair named their peaceful cottage Plâs Newydd, decorated it with great taste and beautified the grounds. There they were known as the Ladies of Llangollen and were visited by various gentry from Ireland and England during their uninterrupted seventy year relationship. Lady Butler died in 1829, and Miss Ponsonby in 1831, both outliving their devoted servant.