Back to Miss Ray’s Jigg[edit]

MISS RAY'S JIGG. English, Country Dance Tune and Jig (6/8 time). G Major. Standard tuning (fiddle). AABB. The title possibly refers to singer Martha Ray [1] (1742-1779), daughter of working-class parents, who became at age seventeen the mistress of John Montagu, 4th Earl of Sandwich and First Lord of the Admiralty in Lord North's administration. Montagu's wife was incapacitated by mental illness, and Ray became all but wife to him, bearing him five children. Plucking her from the milliner's shop where she had been working, he made sure the teen was educated and groomed with the appropriate social graces, and sponsored her studies in music and singing (she also became a proficient keyboard player). 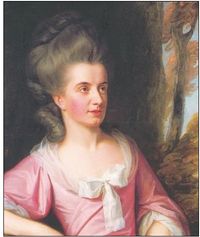 Miss Ray became the lady Montagu intended, the Earl (old enough to be her father) established her at his country house of Hinchingbrook, Huntingdonshire. It was said that she charmed the household and the surrounding county squires and their ladies, with her talent, grace and perfect demeanor. She was a young mother when she made the acquaintance of an army officer named Hackman, who, despite being cognizant of her situation with the Earl, proposed marriage to her. She declined, and attempted to distance herself from him, but he persisted, even resigning from the army to become a clergyman in an attempt to be more acceptable to her. She may have wavered, but remained loyal to the Earl.

On the night of April 7th, 1779, Miss Ray went to see a play at Covent Gardern Theatre, accompanied by her friend, . Hackman, meanwhile, had been stalking her and waited in the Piazza for her to emerge. When she did he came up behind her, pulled her by the gown and turned her around, clapped a pistol to her head and fired. She died immediately, and he pulled another pistol and attempted to take his own life. He botched that, only grazing his forehead, and was subdued and taken to jail. Later he was tried and hanged for his crimes, although he claimed temporary insanity. The fact that he had two pistols, one to dispatch Miss Ray and one for himself, said to the jury that the act was premeditated, however.

He was executed at Tyburn, accompanied in the coach by James Boswell [2] (Laird of Auchinlech and Dr. Johnson's anamnesis). Lord Sandwich, to his credit, brought up all of Martha's children (one, Mr. Basil Montague, became an eminent lawyer).

Back to Miss Ray’s Jigg[edit]