Find traditional instrumental music
This is the stable version, checked on 16 July 2022.
Jump to: navigation, search

Back to Miss Sarah Drummond of Perth (1)

MISS SARAH DUMMOND OF PERTH [1]. AKA and see “Calum Crubach,” "Cripple Lad of the Glen (The)," “Danse Écossaise,” “Devil Shake the Half-Breed (2),” "Gille crubach anns' a Ghleann (An)," “Gurren’s Castle,” "Miss Drummond of Perth (1),” “Mountain Reel (4)," “Our Highland Cousins,” “Paddy Joe’s Highland Fling,” “Perth Highland Fling (The),” "Prince of Wales Jig (The),” “Titanic Highland (The),” “Yorkshire Bite (1)." Scottish, Strathspey. A Minor. Standard tuning (fiddle). AAB. Composer credit for the tune was claimed by Niel Gow {1727-1807} (in his 1807 Third Collection, second edition), however the tune appears under the full title (i.e. referencing Sarah Drummond) in Malcolm MacDonald's 2nd collection (1789, the volume dedicated to the Earl of Breadalbane). No composer was given credit to MacDonald by Gow. It also appears in John and Andrew Gow’s A Collection of Slow Airs, Strathspeys and Reels (London, c. 1795). Andrew (1760-1803) and younger brother John (1764-1826), sons of Niel, established a publishing business in London in 1788 and were the English distributors for the Gow family musical publications. The melody has currency among Cape Breton fiddlers. In Donegal it is set as a Highland (see, for example, Hugh Gillespie’s “Gurren’s Castle”) or as a fling. Quebec fiddler Joseph Allard recorded the tune as “Danse Écossaise.”

The Drummonds were a noble family of Gow’s home county of Perthshire, loyal to the Jacobite cause for which several of the family died for or were exiled. Clementina Sarah Drummond (1786-1865) was the only surviving child and heir of James Drummond (d. 1800), the first Lord Perth, and Clementina Elphinstone (d. 1822, see “Honorable Miss Drummond of Perth”), Lady Drummond, from whom she inherited an extensive fortune and vast Perthshire estates. In 1807 she married Peter Robert Burrell, Lord Gwydyr, Lord Willoughby of Eresby, a great dandy of the day. Upon their marriage he joined his wife’s family name to his, upon the insistence of his father-in-law. Burrell’s parents were also gentry; he inherited the title Lord Gwydyr in 1820 on the death of his father, and Lord Willoughby de Eresby in 1828 (21st of the line), when his mother died. Thus Clementina became Lady Willoughby de Eresby. The couple resided at Drummond Castle, where the gardens (now one of the finest in Scotland) were reshaped into a vast formal parterrein in the 1840’s for Sarah. Queen Victoria planted copper beech trees when she visited the castle in 1842. 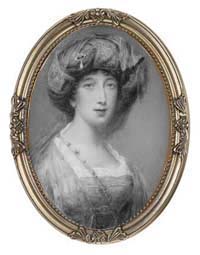 Clementina was a patroness of Almack’s assembly rooms, but was considered “to be the highest stickler and overly grand,” along with Lady Castlereagh. In fact, she is often featured as a prime villainess in modern Regency-setting romance novels. Balls were held at Almack’s every Wednesday night during the Season. Admittance was tightly controlled by a social elite of women, patronesses, that, in 1814 (according to a report by Captain Gronow), included Lady Castlereagh, Lady Jersey, Lady Cowper, Lady Sefton, Mrs. Drummond-Burrell, Princess Esterhazy and Countess Lieven. A rejected application for a season pass to Almacks was cause for social ruin, and the cabal of patronesses made sure that the merchant and pretending classes were kept well away. Curiously, money was not a prime dictator of acceptance, but rather manners, breeding and rank were the desired elements in an applicant.

There were other melodies composed for Sarah Drummond: see “Miss Clementina Sarah Drummond of Perth.” The tune appears as "An gille crubach anns’ a Ghleann" (The Cripple Lad of the Glen) in Glasgow piper, pipe teacher and pipe-maker William Gunn's Caledonian Repository of Music Adapted to the Bagpipe (1848).

Back to Miss Sarah Drummond of Perth (1)