Back to Mná na hÉireann[edit]

MNÁ NA hÉIREANN (The Women of Ireland). Irish, Air (cut time). Ireland, West Kerry. E Dorian/D Major. Standard tuning (fiddle). One part. The melody was composed by Sean Ó Riada [1] (1931-1971) to a poem by Peadar Ó Doirnín (1704?-1769). Ó Riada was instrumental in helping to revive Irish traditional music in the 1950's and 1960's. It was out of his group Ceoltóirí Cualann that the band The Chieftains was formed, but by the age of 40 Ó Riada had succombed to alcoholism. The Chieftains version of "Mná na hÉirreann" was used as part of the soundtrack for the film Barry Lyndon by director Stanley Kubrick. 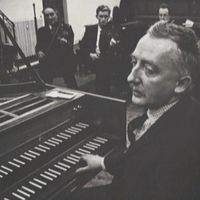 There's a woman in Ireland who would be envious if I were to get only a kiss
From a woman at a fair, isn't it strange, and I love them all;
There's a woman whom I prefer to battle and a hundred of them I will never get
And there's a beautiful girl who belongs to a man without English, so ugly.

Back to Mná na hÉireann[edit]