Moon Behind the Hill

Back to Moon Behind the Hill

MOON BEHIND THE HILL. AKA - "Moon Behind the Mountain." American, Two-Step (cut time). G Major. Standard tuning (fiddle). AABB. The piece was popularized by West Virginia fiddler Melvin Wine (1909-2003), who played it at as a two-step at a moderately brisk walking pace, although it since has been recorded at faster speeds. It is an adaption of a song air, and although there is an Irish song called "Moon behind the Hill" (sung to the air "Harp that Once from Tara's Halls", for one), it is unlikely that this is the source for the song. A more plausible candidate for a precursor is "Moon behind the Hill", a popular parlor song by T. Brigham Bishop, published in Boston in 1858. The words begin: 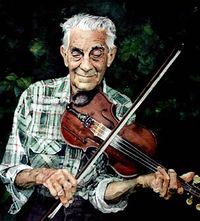 Melvin Wine (1909-2003)
Bishop's published ballad, however, employs a different melody than does Wine's. Fiddler Erynn Marshall asked Wine about it and recorded his answer:

Sometimes I'd be out somewhere and I would pick up one like...oh, what is the name of it anyhow? Well I play it a lot, but I learned it. I was a-walkin' from Fairmont to Clarksburg along the road. That's a thirty-mile walk. Well we got about halfway when a feller that was with us said, 'Let's go up to this dancehall and rest 'while and watch 'em dance.' 'Moon Behind the Hill,' that's the tune! So we went up to that dancehall, and there was nobody there but that fiddler, the guitar player, and the bouncer. They was playin' this tune and I'd never heard it, so I said to this feller, 'What is the name of that?' and he says, 'Moon Behind the Hill,' and I said, 'Would you play it again?' He said, 'Yea,' so he played it again. He said, 'Do you play a fiddle?' I said, 'Yea.' So I come home, and two or three months later , I thought of it and just went to play it. That's the way tunes is. If you like them, they'll just come around. [1]

Wine said this was around the year 1927 in his performance video (see below).

Back to Moon Behind the Hill