Back to Mooncoin Jig (The)[edit]

MOONCOIN JIG, THE ("Port Móin Choinn," "Port Muin-Cuine" or "Port Muine Coinin"). AKA and see "Major (3) (The)." Irish, Double Jig. A Mixolydian. Standard tuning (fiddle). AABBCC. Mooncoin [1], or Mooncoyne, is a town in County Kilkenny in the southeast of Ireland, an area famous in the 19th century and the early 20th century for its pipers. One of these, by the name of James Byrne, was 'discovered' in Mooincoin in 1904 by the clerics and Irish music enthusiasts Father Henebry and Father Fielding, who managed to record Byrne on an Edison cylinder. Excited by their find, they arranged to have him conduct a class for aspiring pipers and they acquired a venue. Unfortunately, the two priests had not reckoned with the 'microbe of vagrancy', as O'Neill puts it, and were at pains to locate the piper who was loath "to submit to the restraints of a settled residence or the monotony of steady employment. So away he went to enjoy the pleasure of conviviality and change of scene, leaving his kind-hearted benefactors in a fit mood to appreciate the feelings of the man who undertook to domesticate wild ducks" (Breathnach, 1997). "The Mooncoin" is nearly identical to the Scottish/English tune "Major (3) (The)" (which dates at least to 1742), and is related to "Denis Delaney" and the march "King William's Rambles." 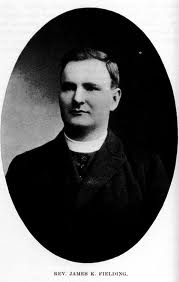 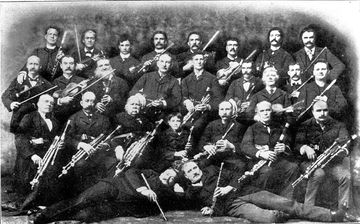 Chicago's Irish Music Club in the first years of the 20th century. Fr. J.K. Fielding is in the 2nd row, seated, extreme right.

Source for notated version: "Fielding" [O'Neill]. Father James K. Fielding was a Chicago priest and flute player who was born in Mooncoin, County Kilkenny. Fielding was an Irish music and culture enthusiast who spent time in Dublin, where he continued to pass along such tunes as he came by. He and Henebry were instrumental in bringing to O'Neill's attention Martin O'Reilly, the blind Galway piper.

Back to Mooncoin Jig (The)[edit]