Back to Morayshire Famer's Club (The)[edit]

MORAYSHIRE FARMER'S CLUB, THE. Scottish, Reel. G Major. Standard tuning (fiddle). AAB. Composed by William Marshall (1748-1833). The 18th century was a club-ing age, with literary, social and even gentlemen farmers' convivial clubs. The Morayshire Farmer's Club was started in 1799 by Issac Forsyth (1768-1859), bookseller, and the son of a merchant in Elgin, who continued as secretary for a quarter of a century. 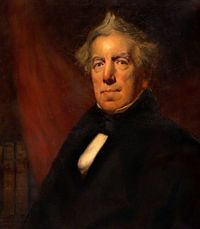 Forsyth started the first circulating library in the north of Scotland and wrote two books about the area in which he lived, Muckle Issac, a survey of Moray, and Little Issac, an account of its antiquities. The club was dedicated to the improvement of agricultural science and "the collection of valuable books on every department of rural economy" (Long, Penny Cyclopædia, 1837). The first minutes of the Moray Club showing the first resolution of its members to have been "that they should dine at Peary's the first Friday of each month, harvest excepted."

Back to Morayshire Famer's Club (The)[edit]