Back to More Grog Coming[edit]

MORE GROG COMING. Shetlands, Shetlands Reel. Shetlands, Unst. D Major. Standard tuning (fiddle). AAB. From the island of Unst, Shetland. The term grog, referring to an alcoholic drink, stems from the British navy of the mid-18th century. Admiral Vernon, who was called "Old Grog" after the stiff wool grogram coats he wore, decided to water down the Navy's rum, a turn of events not at all pleasing to the average Jack Tar, who began to refer to the diluted drink as 'grog' after the responsible admiral. One who managed to get drunk on the concoction became 'groggy.' 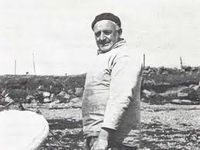 Source for notated version: Gilbert Gray (Unst, 1971) [Cooke]. The tune was also recorded in the field by Pat Shaw from the playing of John Stickle, Lerwick, in 1972.

Back to More Grog Coming[edit]