Back to Morning Post[edit] 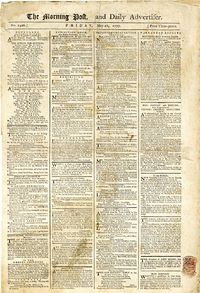 The Morning Post [1] was a daily newspaper first published in London in 1772, founded by John Bell (1745–1831). It originally supported the Whig party, until it changed hands toward the end of the century and became a Tory organ. The paper survived until 1937, when it was absorbed by The Daily Telegraph.

Back to Morning Post[edit]