Find traditional instrumental music
This is the stable version, checked on 14 June 2019.
Jump to: navigation, search

Back to Morris Allen's Brickyard Joe 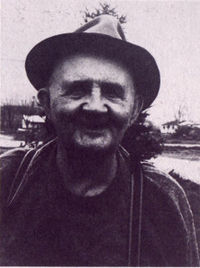 A lot of my fiddle tunes I learned from Morris Allen...He's getting near 80 but he's still a pretty good old fiddler. Back in the '30's, he was a bachelor and had a good job in a stell mill and he used to like to get all the fiddlers together. His uncle John Kiebler was a real good fiddler and Clark Kessinger would come stay at Morris' house for a week or two. I first met him when I was out fox hunting. Morris had lost some dogs and he had his fiddle with him. And I then got to hearing him and different good fiddlers around Portsmouth and the fiddle sounded so pretty that I just had to get into it and learn those tunes. (OTM, pp. 10-11. There is a picture of Morris on page 10.)

Back to Morris Allen's Brickyard Joe