MORRISON'S (REEL) [1]. AKA and see "Dunmore Lasses (The)," "High Road to Sligo," "Road to Knock (1) (The)." Irish, Reel. E Dorian. Standard tuning (fiddle). AA'BB'. The title refers to Galway flute player Tom Morrision (1889-1958), the 'Dunmore Flash' (who was from Glenamaddy, in the Dunmore area of Co. Galway), who recorded the melody on a 78 RPM in 1927. Morrison sometimes partnered with renowned south County Sligo fiddler Michael Coleman for duet recordings, however, in the case of this tune he recorded it with bodhran player John Reynolds, under the title "Dunmore Lasses (The)." It was the first tune in a set that included "Galway Rambler (The)" and "Castlebar Traveler (The)"). 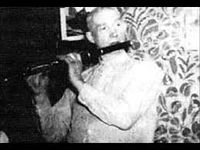