MOSS ROSE [1], THE. English, Hornpipe. D Major. Standard tuning (fiddle). AABB. The melody appears in the music manuscript copybook of fiddler John Burks, dated 1821. Unfortunately, nothing is known about Burks although he may have been from the north of England.

The moss rose is an annual from Brazil that grows about six inches tall with flowers about an inch across. It does well in sun, tolerates poor soil well, and is often used for ground covers and edging. The Victorians loved moss roses as cut flowers, decorating ball gowns and hats with them or tucking them into buttonholes. However, as the majority flower for about four weeks only, usually from mid-June to mid-July, they lost much of their popularity when modern, repeat-flowering roses were introduced. 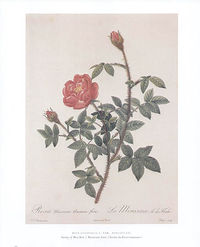 'Twas in a flow'ry sweet retreat,
As Damon and Clarinda sat.

However, as the flower was popular there are a number of songs and instrumental pieces that have "moss rose" in the title.