Back to Mount Vernon Polka[edit]

MOUNT VERNON POLKA. American, Polka. G Major ('A' and 'B' parts) & D Major ('C' part). Standard tuning (fiddle). ABBCC. The tune was composed by Charles W. Reinhart, dedicated to Miss Mary Claretowne of Baltimore, "as performed by the Philadelphia Band, No. 1, at Cape May." Cape May is a summer seaside resort town in New Jersey where wealthy Philadelphians would retreat to escape the heat of the summer. Reinhart's polka commemorates the Mount Vernon Hotel at Cape May (pictured on the cover of the sheet music, published in Philadelphia by Edward L. Walker, 142 Chestnut St., in 1855). 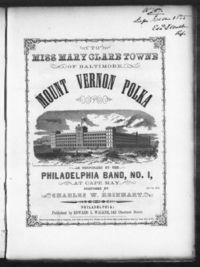 In the 1850's this hotel was one of the largest and most popular resort hotels in America and was the largest wooden structure of its kind in the world. The hotel burned in 1871, lighting up the sky as far away as Philadelphia.

Back to Mount Vernon Polka[edit]