Find traditional instrumental music
This is the stable version, checked on 12 September 2022.
Jump to: navigation, search

Back to Mountain Belle Schottische

MOUNTAIN BELLE SCHOTTISCHE. English, American; Schottishe. G Major. Standard tuning (fiddle). AABBAAB'B'. Composed by Charles Kinkel in 1856 [1]. It was a popular piece in America and Britain, regularly printed on solo sheets and in piano collections for more than ninety years. Surprisingly little is known about Kinkel, despite his many published light, popular musical works (which includes "Santa Claus' Galop" (1874), among many others!). His obituary records that he was born in Wattenhelm, Germany, in 1832, and finished his musical studies (along with Latin, Greek and French) at the Gymnasium at Reinpfeltz. 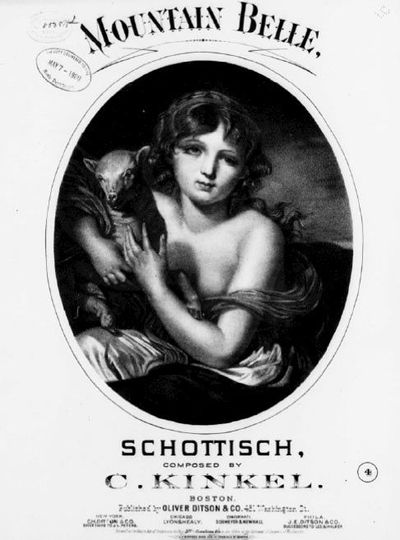 He then came to America. He taught for a short time near Hamilton, Ohio, then at Cincinnati and afterwards, from 1853 to 1858 at Lexington Cynthiana and Nicholasville. In 1858 he accempted a position in Shelbyville (Ky.).

He was married to Miss Florence Norvell, of Virginia, Dec. 1, 1964. Four children were born of this union. Mrs. Kinkel died April 12, 1878. Mr. Kinkel remained in Shelbyville, with the exception of about two years spent in St. Louis, and was one of its leading and most enterprising citizens. He was a fertile writer, and his compositions, which are of a popular order, are known and played throughout the land. Mr. Kinkel was a self-maid man, and owed his success in life to his sterling qualities. He was an indulgent father, a considerate neighbor and a true citizen. He was sixty years of age at the time of his death [July 12, 1891].[1]

See also the similar Irish barn dance "Old Blackguard (1) (The)." A tune by this title was in the repertoire of the Hornellsville Hillbillys, a Steuban County, N.Y., string band of the 1930's.

See also listing at :
Jane Keefer's Folk Music Index: An Index to Recorded Sources [2]
See a piano version on youtube.com [3] (clicking on "show more" reveals that three generations of the family have played the tune, with another family version linked on youtube).


Back to Mountain Belle Schottische