MOUNTAIN ROAD [1], THE (Bóthar an Chnoic). Irish, Reel. D Major. Standard tuning (fiddle). AB (Mallinson, Mitchell, Mulvihill, Vallely): AABB (Williamson): AA'BB (Phillips): AABBB' (Kennedy). The single-reel "The Mountain Road" was composed in 1922 by County Sligo fiddler Michael Gorman (1895-1970), originally as a six-part piece, although it is standard now to play it as a two-part tune (a single reel is one in which each part generally repeated only once). He originally recorded it on a 78 RPM record for the British-based Chappell lable. Philadelphia fiddler John Vesey, himself originally from County Sligo, also recorded the tune in six parts in 1961. There is an actual 'Mountain Road' in Tubbercurry (or Tobercurry), Sligo, the location of the Old Boys school and the house were Gorman's family still lives. The road leads to a place called Moylough, the original home of fiddler John Vesey (who emigrated to America). It is rumored that Gorman was inspired by the fact that the mountain road was actually the back road out of town and a better smuggling route for poitín since the route wasn't as well traveled, and because the main road had a gardai station on it. The contraband was supposedly carried in fiddle cases held on the handlebars of bicycles. Piper Thomas Johnson writes: "Michael's son used to take his dad's fiddle down the pub to sessions. He didn't play himself but thought his dad would like the idea of his fiddle at least, going down the pub for the session" [Irtrad-L]. 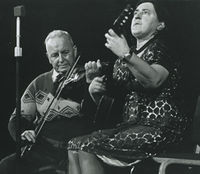