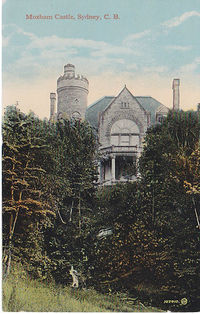 MOXHAM CASTLE. Canadian, Strathspey. Canada, Cape Breton. G Major. Standard tuning (fiddle). AB. Composed by Cape Breton fiddler and composer Dan R. MacDonald (1911–1976). Moxham Castle [1] was built in 1898 by Arthur James Moxham (1854–1931), originally from South Wales, but who had emigrated as a teenager to the United States. There he married his American wife, Helen Moxham, and settled in Ohio. Moxham took a job as the manager of the Dominion Iron and Steel Company, in Sydney, Cape Breton, built his grand home, and moved his wife and four grown children (two sons and daughters) there. Both boys worked for their father in the steel plant, and things went well for a few short years. The eldest boy, Tom married, and lived in a house also built for them by Arthur Moxham.

Tom was working as a construction manager when tragedy struck. As he was supervising a project in the rail yard, his foot became trapped and he was run over by a train and killed. Furthermore, his pregnant wife Ellen and his son both died in childbirth two months later. It was too much for the Moxham's, and Arthur resigned his position a year later. The family moved away, although continued to summer in Sydney for some years, until the world war broke out in 1914. The castle changed hands a few times, but, left vacant in the early 1960's it was vandalized and succumbed to fire in 1966.