MOY HALL. AKA - "Moyhall Reel." Scottish, Reel (cut time). C Major. Standard tuning (fiddle). AB. "Moyhall is the romantic residence of Sir Aeneas MacIntosh, Bart., chief of that name, a most worth, benevolent, and hospitable character. {Alexander Aeneas Mackintosh of Mackintosh is now [in 1816] Chief of the Clan, and owner of Moyhall}" (Fraser). Moy Hall [1], near Inverness, has been the seat of the Clan Mackintosh chiefs since the 14th century. 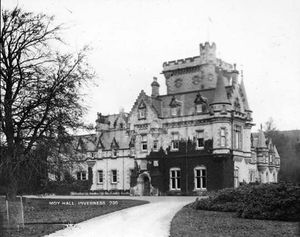 Old Moy Hall, demolished after World War II due to dry rot. A new, smaller, Moy Hall was constructed near the same site.

During the Rebellion of 1745 Lady Anne Mackintosh (nee Anne Farquharson, 1723-1787) played host to Prince Charles Edward Stuart. Her husband, the chief of the clan was away fighting for the Government, but Lady Anne was a Jacobite supporter. Lord Louden's Crown forces were dispatched from nearby Inverness to capture the Prince, or at least delay his progress, Lady Mackintosh was appraised of their coming. She had four of her men hide along the road that led the troops to Moy Hall, and when they approached they set off pistols and clamored for the (nonexistent) troops of Clan MacDonald and Cameron to advance, tricking the government forces into believing there was a large force coming to oppose them. The troops speedily retreated, an even memorialized as "The Rout of Moy." 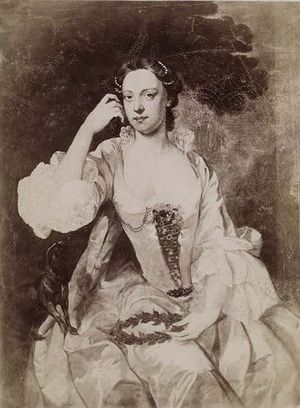 Source for notated version: "From the Inverness Collection" [MacDonald].