Find traditional instrumental music
This is the stable version, checked on 15 August 2020.
Jump to: navigation, search

Back to Mr. Bologna's Hornpipe in Mother Goose 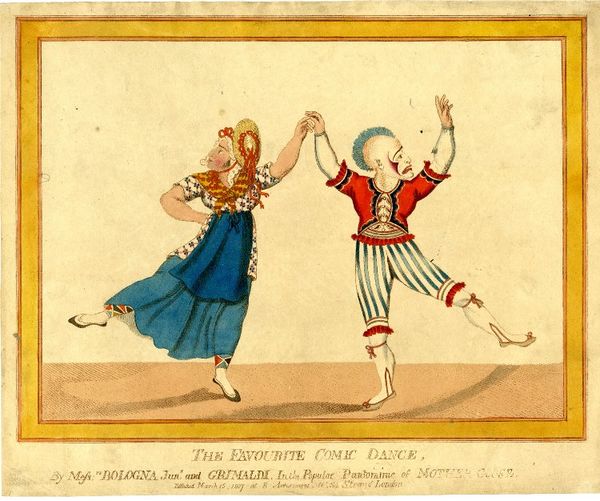 Grimaldi and Bologna in a comic dance in Mother Goose (Grimaldi is dressed as a woman), 1807.
MR. BOLOGNA'S HORNPIPE IN MOTHER GOOSE. English, Hornpipe (cut time). D Major. Standard tuning (fiddle). AABB. John Peter Bologna (1775 –1846), known as Jack Bologna on stage, was an Italian actor and dancer, who spent much time in England popularizing the role of Harlequin in Georgian pantomimes and harlequinades in the early part of the 1800s at the Sadler's Wells and Covent Garden Theatres. His greatest success was in the pantomime Harlequin and Mother Goose; or, The Golden Egg in which he performed with his friend, the Italian actor and clown Joseph Grimaldi. Bologna was also an amateur machinist who often showcased his mechanical designs, using them on stage as part of his productions. Having mostly retired from the stage in 1820, traveled with "a very ingenious mechanical and philosophical Exhibition"[1], and finally settled in Glasgow as a teacher of dancing. he struggled financially and lived in severe poverty throughout the remaining 26 years of his life, and was forced to take a job as "Ebony," the black-faced foil to the conjuror Anderson, "The Wizard of the North," before dying penniless aged 71.

Back to Mr. Bologna's Hornpipe in Mother Goose