Back to Mr. Douglas of Springwood Park[edit]

MR. DOUGLAS OF SPRINGWOOD PARK('S STRATHSPEY). AKA "Croppies Strathspey." Scottish, Strathspey. G Major. Standard tuning (fiddle). AB (Alburger, Kerr, Lerwick, Stewart-Robertson): AA’B (Martin). The composition has been credited to Peter Milne (e.g. by Lerwick) erroneously, but it in fact is the composition of Alexander Givan (1752-1803) from Kelso. Springwood Park, Kelso, was originally called Brigend, and was purchased and re-named by Admiral Sir James Douglas in 1750, who built an estate on the property. The Springwood House became dilapidated and was razed in the first half of the 20th cemtury. A 'cropie,' referred to in the alternate title, refers to a tenant farmer. 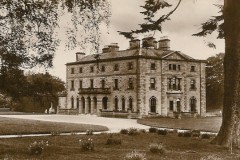 Back to Mr. Douglas of Springwood Park[edit]