Find traditional instrumental music
This is the stable version, checked on 20 January 2022.
Jump to: navigation, search

Back to Mr. Isaac’s Maggot 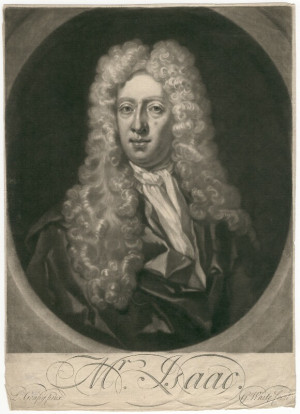 Mr. Isaac, painted by Louis Goupy. The original portrait is lost, but this engraving of it by George White was published in the early 18th century.
MR. ISAAC'S MAGGOT. English, Country Dance Tune (3/2 time). C Major. Standard tuning (fiddle). AB. Issac (c. 1640-1721) was a court dancing master whose hey-day was in the late 17th century, a younger contemporary of John Playford. He has been credited with introducing English country dancing to the court of Louis XIV in France, and he taught Queen Anne as a young princess. Around the year 1702 he became the unofficial royal dancing master. Along with another dancing master named Beveridge, Isaac devised maggots, or distinctive longways country dances often set to triple-time hornpipe tunes and dedicated to a personage. The Richmond, for example, was a ball dance for the court intended to honor the Duke of Richmond, and was first published in 1706 (the music for which was a triple-time hornpipe).

Dance researcher Moira Goff has discovered that "Mr. Isaac" was in fact a Royal dancing master named Francis Thorpe, offering as proof the will of his uncle, Jerome Gahory, who previously occupied the post of Royal dancing master. Gahory left the residue of his English estate to "Francis Thorpe his nephew (known by the name of Isaac)." Francis was the product of Gahory's sister and "Mnsr. Isac", who had a reputation as one of the best dancing masters in Paris. Young Francis may have taken the name Isaac "as a compliment to his father as well as to show his lineage with its associated status." After some time dancing in France, the younger "Mr. Isaac" removed to England, and is recorded as having danced in the English court masque Calisto in 1675. This Mr. Isaac died in 1681, and Goff concludes that references to "Mr. Isaac" after this must refer to his son. John Essex, in his Preface to The Dancing Master (1728) recorded:

The late Mr. Isaac, who had the Honour to teach and instruct our late most excellent and gracious Queen when a young Princess, first gained the Character and afterwards supported that Reputation of being the prime Master in England for forty Years together: He taught the first Quality with Success and Applause, and was justly stiled the Court Dancing-Master, therefore might truly deserve to be called the Gentleman Dancing-Master. (p. xi)[1]

Sixteenth and seventeenth century country dance tunes sometimes had the word "maggot" in their titles, perhaps derived from Italian Maggiolatta or Italian May song, but used in England to mean a whim, fancy, plaything, 'trifle'--essentially an 'earworm'[2]. A maggot was also another name for a dram, a small unit of liquid measure. This anonymous melody dates to 1695, when it first appeared in Playford's Dancing Master, 9th edition. The dance and tune were retained in the long running series through the 18th and last volume, then published by John Young, heir to the Playford publishing concern. It also was included by the Walsh's (father and son) in their Compleat Country Dancing Master, editions of 1718, 1735 and 1754. For more on Isaac see Jennifer Thorp's article "Mr. Isaac, Dancing-Master" in Dance Research - Volume 24, Number 2, Winter 2006, pp. 117-137, where, for example, she gives:

The earliest references to him as a performer in London connect him with the Stuart Court, for in April 1673 a dancer named Isaac was one of several dancers (along with Mr. Priest) who performed as Venetians, a Spaniard, a Conjuror, Devils, and Shepherds, in a masquerade for King Charles II's illegitimate son, the Duke of Monmouth.

Back to Mr. Isaac’s Maggot