Find traditional instrumental music
This is the stable version, checked on 20 January 2022.
Jump to: navigation, search

Back to Mr. Lane’s Maggot

MR. LANE'S MAGGOT. AKA - "Lane's Maggot." AKA and see “Polly for ever,” “Richmond Ball,” "Round (The)." English, Country Dance Tune (2/2 time). D Minor. Standard tuning (fiddle). AABB. Sixteenth and seventeenth century country dance tunes sometimes had the word "maggot" in their titles, perhaps derived from Italian Maggiolatta or Italian May song, but used to mean a whim, fancy, plaything, 'trifle'--essentially an 'earworm'. A maggot is another term for a dram; a unit of liquid measure. Maggots were longways country dances of the late 17th century often dedicated to a personage or named for a composer; they appear for the first time in the 9th edition of the Dancing Master (1695). "Mr. Lane's Maggot" is attributed to Mr. Lane who was dancing master to Charles II, who also composed or is associated with Playford's "Lane’s Minuet" and "Mr. Lane's Trumpet Minuet (1)" and "Mr. Lane's Trumpet Minuet (2)."

The tune appears in Pepys V, circa 1690. William Vickers prints a major-mode version in his 1770 music manuscript collection under the title “Richmond Ball.” “Mr. Lane’s Maggot” first appears in print in Henry Playford’s Dancing Master, 9th edition (London, 1695) and in all subsequent editions of the Dancing Master through the end of the series with the 18th and final edition in 1728 (at that time published by John Young). Playford (1695) notes that it is "A Song made by Mr. Tho. D'Ursey upon a new country dance at Richmond, called, Mr. Lane's Magot." Young gives the alternate title “Richmond Ball” in the 17th and 18th editions (1721 & 1728, respectively). It was published by Thomas D’Urfey in Wit and Mirth, or Pills to Purge Melancholy, vol. 2 (p. 218, 1719, as the indicated tune for the song "The Richmond Recreation: or, The Royal Dance of Delight"), and in the various editions of London publisher John Walsh's Complete Country Dancing Master, beginning in 1718 (followed by editions of 1731 and 1754) as "Lane's Maggot." The tune was used as a vehicle for a broadside ballad by Thomas D'Urfey called "Strike up drousy guts-scrapers", "upon a new Country Dance at Richmond called Mr. Lane's Maggot": 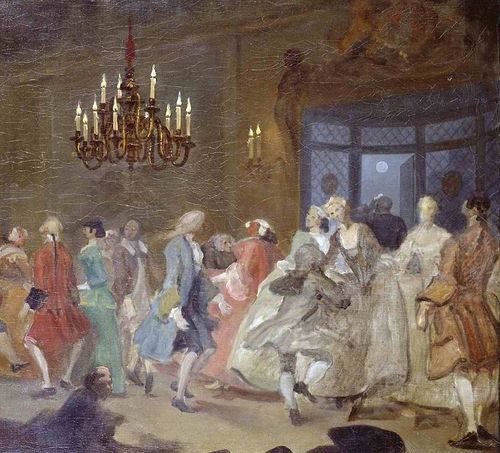 Strike up Drowsie Guts Scrapers
Gallants be ready
Each with his lady...
I'll teach you all the dance.
Cast Off, Tom, behind Johnny
Do the same Nanny
Eyes are upon ye;
Trip in between
Little Dicky and Jane
And Set in the Second Row;
Then cast back you must too,
And up the first row
Nimbly thrust through;
Then, then turn about
To the left, or you're out
And meet with your Love below.
Pass, then cross
Then Jack's Pretty Lass
Then turn her about, about and about,
And Jack if you can do so too
With Betty, whilst the Time is true,
We'll all your ear commend.
Still there's more
To lead all four;
Two by Nancy stand
And give her your hand
Then cast her quickly down below
And meet her in the second Row
The Dance is at an End.

A more sophisticated employment of the melody was by Francesco Barsanti as the subject in the allegro section of his Overture in A minor, Op. 4 no. 1 for string quartet and keyboard (optional), published in Edinburgh around 1745. Barsanti spent much of his professional life in London and in Edinburgh, although he was particularly esteemed in the northern capital. Several of his overtures quote popular tunes of the day.

See also listing at :
Hear the tune played by Les Witches on youtube.com [1]

Back to Mr. Lane’s Maggot