Find traditional instrumental music
This is the stable version, checked on 2 December 2021.
Jump to: navigation, search

Back to Mr. Macleod of Geanie's Strathspey

MR. MACLEOD OF GEANIE'S STRATHSPEY. Scotish, Strathspey (whole time). E Major. Standard tuning (fiddle). AB. The strathspey was published by the Edinburgh music publishing firm of Nathaniel Gow and William Shepherd in a volume entitled A Collection of Entirely Original Strathspey Reels, Marches, Quick Steps &c., "by Ladies resident in a remote part of the Highlands of Scotland, as corrected by Nath. Gow." Unfortunately, the composers names are not given. See also another tune in the volume for the family, "Miss Macleod of Geanie," and "Mrs. MacLeod of Geanie's," a strathspey printed by Gow and Shepherd on a single sheet in 1803. 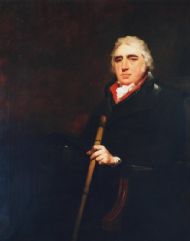 Donald Macleod, 3rd of Geanies, and his wife Margaret, daughter of James Craufurd of Rotterdam, had six daughters, Isabella, Elizabeth, Mary, Annabella, Jane and Margaret. A son, James Craufurd (Crawford) Macleod (1775-1821), sought his fortune in the West Indies in his plantation called Geanies on the Corentyne coast coast of Berbice, and was also in business in Stabroek, Demerara, where he was a member of the Court of Justice of the Colony. James Macleod was also a slave owner who was in business with the slave trader George Baillie, although there were significant tensions between the two.

Donald was a Whig sympathizer and the Sheriff-depute of Ross and Cromarty, and held the office for some sixty years until his death in 1834 (at age 89). Macleod also prepared a 'magnificent collection of stuffed birds and animals' for Lord Seaforth.

Back to Mr. Macleod of Geanie's Strathspey