Find traditional instrumental music
This is the stable version, checked on 4 August 2020.
Jump to: navigation, search

Back to Mr. Maule’s Frolick

MR. MAULE'S FROLICK. AKA – “Honorable Mr. Maule's Frolick (The).” AKA and see "Trip to Dormont (The)." Scottish, "Slowish" Jig. F Major ('A' and 'B' parts) & F Minor ('C' and 'D' parts). Standard tuning (fiddle). AABCCDD. Composed by Scottish composer, musician, editor and music publisher Nathaniel Gow (1763-1831), son of the famous Niel Gow. William Ramsay, Maule (1771-1852), Lord Panmure of Brechin and Navar, Forfarshire, was a long and close friend of Nathaniel’s, whose tune honors him, or rather, it is a double-entendre that obliquely references Maule’s famous escapades. Maule was long-time MP for the county of Forfar, a supporter of the Whigs and a liberal. Douglas’s Peerage of Scotland says of him:

As a young man he was devoted to the turf, and many of his practical jokes at race meetings were long recounted in Scotland. He had been one of the most dissipated and extravagant, even of the Scottish gentry of his younger days, and survived them, thanks to a constitution of extraordinary strength and a fortune of vast resources. He preserved late into this century the habits and passions scandalous and unconcealed which had, except in his case, passed away with the last. He was devoted to his friends so long as they remained complaisant, and violent and implacable to all who thwarted him. His uncontrollable temper alienated him from nearly all his family in his latter years, yet he performed many unostentatious acts of charity. In politics he was a liberal, and his views were invariably humane; in private life he was an immovable despot. 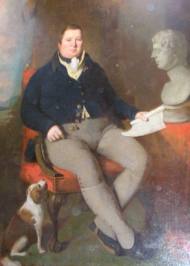 Maule’s excesses were legendary. The following story (for which there is no substantiation) is ensconced in local lore. There were two valuable and old silver communion cups belonging to St. Rules Parish Church, Monifieth, that Maule desired to possess, dating from 1645. He approached the kirk minister, Mr. William Johnston (1787-1829) with a proposal to donate four new cups in their place if he should have the old ones. Mr. Johnston answered him, with fine courage, reportedly saying: “To give you these cups would be like allowing the vessels of the Lord’s House to grace Bashazzar’s Feast!” Unfortunately, his assistant and successor, Rev. John Bisset, was not so stalwart, and, when Maule approached him in 1816, the politician came away with the valuable ancient objects. According to rumor, Maule wanted them to present to a ‘noble friend’ interested in church plate—the Duke of Sussex, sixth child of George III—although this cannot be substantiated in any way. The cups were subsequently lost. However, in the 20th century the cups separately re-surfaced and one was purchased and donated to the Monifieth kirk. The other stood for sale, and the church raised funds for its purchase, until a Mrs. MacDonald of London, a widow of Lord Panmure’s grandson, read about the loss and proposed retrieval of the cups. She felt moved to donate the funds for the purchase of the second cup, thus restoring the pair to their rightful place. [Rev. Gordon Quig, Monifieth Local History Society].

When Nathaniel was elderly and infirm, and in dire financial straits from the bankruptcy of his music publishing business, old friends and patrons were aroused to aide him. One was Mr. Maule, who wrote to him:

Your letter has given me real uneasiness, but although Scotland forgot itself in the case of Burns, I hope the present generation will not allow a Gow to suffer for the want of those comforts in his old age, to which his exertions for so many years for their amusement and instruction, so well entitle him. My plan is this, that an annuity of £200, should be got by subscription, and if the duke of Athol, lords Breadalbane, Kinnoul, and Gray, would put their names at the top of the list, it would very soon be filled up; this in addition to an annual ball at Edinburgh, which ought to produce at least 200 pounds more, would still be but a moderate recompense for the constant zeal, attention, and civility, which you have shown in the service of the public of Scotland during a long period of years. I, for one, shall do my part, because I never can forget the many happy hours I have passed, enlivened by the addition of your incomparable music.

Unfortunately the planned subscription never came about, but Mr. Maule continued to send Nathaniel a kind letter yearly along with a substantial sum. “Trip to Dormont” is the alternate title given by the Gows. Nathaniel Gow also composed tunes for other members of the family--see "Miss Maule of Panmure."

Back to Mr. Maule’s Frolick