MR. STABILINI'S FAVORITE. Scottish, Strathspey. E Flat Major. Standard tuning (fiddle). AAB. Composed by Nathaniel Gow (1763-1831) in honor of Signior Girolamo (or Hieronimo) Stabilini (1762-1815), a celebrated Italian violinist and conductor living in Edinburgh from 1792 to his death in 1815. He was conductor of the Gentleman's Orchestra and the Edinburgh Concerts and was much admired as a player. Robert Burns makes reference to attending one of them in the winter of 1786. “He often played at Gordon Castle and Huntly Lodge, and was acquainted with (Scots fiddler-composer, the Duke of Gordon’s butler and later factor) William Marshall, whose compositions and violin playing he greatly admired. He died of dropsy and was buried in St. Cuthbert’s Churchyard, where his tombstone is still to be seen” (David Baptie, Musical Scotland, Past and Present, 1972). This entry mentioning Stabilini can be found in the archives of Stationer’s Hall: “4.12.1800. O wat ye wha’s in yon Town. A new rondo. As performed by Mr. [Girolamo] Stabilini at his concert. Composed, and dedicated by permission to Miss D. Grant by P(eter) Urbani.” His visage was included (with some 60 others) in a period portrait called "The Inauguration of ROBERT BURNS as Poet-Laureate of the CANONGATE KILWINNING LODGE 1787", depicting Robert Burns being honored by the Masons. 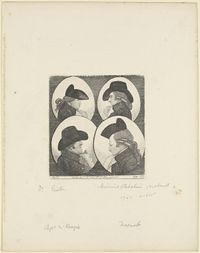