Find traditional instrumental music
This is the stable version, checked on 30 March 2020.
Jump to: navigation, search 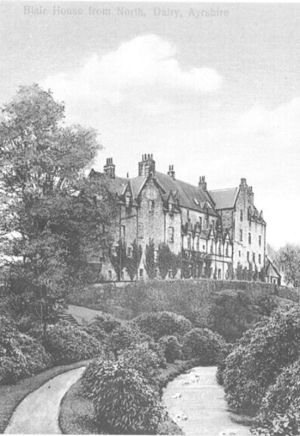 Blair House
MRS. BLAIR OF BLAIR'S REEL. Scottish, Reel (whole time). D Major. Standard tuning (fiddle). AAB. Composed by fiddler-composer John French (1752–1803). It appears in his A Collection of Strathspeys, Reels &c. (c. 1801), dedicated to Mrs. Boswell of Auchinleck, and published by Gow & Shepherd, “for behoof of Mr. French’s widow and children.” The phrase may indicate that French was incapacitated, or perhaps dead, in which case either the dates of publication of the dates of his death are faulty.

One of two main branches of the Blair family lived at Blair House, Ayrshire, where French was from. Blair House was the seat of the Barony of Blair and the titular line of the Blairs of Blair family for about 24 generations. At the time French was active, Blair House was occupied by William Blair who was MP for Ayrshire and Colonel of the Ayrshire Regiment of Fencible Cavalry. William succeeded to the estate in 1782. He married Magdalene, daughter of John Fordyce, Esq. of Ayton, Berwickshire, and the couple had five sons and seven daughters. Magdalene, probably the person honored by French's title, died in 1817.