Back to Mrs. Boswell of Auchinleck’s Reel[edit]

MRS. BOSWELL OF AUCHINLECK'S REEL. Scottish, Reel. B Flat Major. Standard tuning (fiddle). AAB. Composed by fiddler-composer John French (1752-1803), originally from Cumnock, Ayrshire. The reel was published in his posthumous 1801 collection Collection of New Strathspey Reels &c., in pride of place, on the first page, as the volume was dedicated to Mrs. Boswell, the wife of James Boswell (1740-1795), Dr. Johnson's amanuensis. 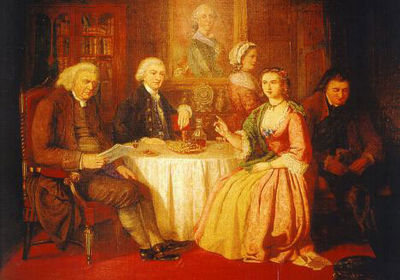 Dr. Johnson and the Boswell Family

From Wikipedia [1]: "Boswell married his [first] cousin, Margaret Montgomerie [2], in November 1769. She remained faithful to Boswell, despite his frequent liaisons with prostitutes, until her death from tuberculosis in 1789. After his infidelities, he would deliver tearful apologies to her and beg her forgiveness, before again promising her, and himself, that he would reform. James and Margaret had four sons and three daughters. Two sons died in infancy; the other two were Alexander (1775–1822) and James (1778–1822). Their daughters were Veronica (1773–1795), Euphemia (1774-ca. 1834) and Elizabeth, known as 'Betsy', (1780–1814). Boswell also had at least two extramarital children, Charles (1762–1764) and Sally (1767–1768?)." In addition to suffering his affairs, James Boswell suffered from periods of depression, and was given to excessive alcohol use and had a probable gambling addition.

However, Margaret seems to have been well aware of Boswell's 'inconsistentcies' as the two had long known each other before marriage, and had become close confidants and had talked off-and-on about marriage. In a letter to a correspondent named Temple dated May 3, 1769, but not sent until sometime later, he wrote about Margaret's accompanying him on a trip to Dublin where he journeyed to pursue the prospect of marriage with a young lady there:

I must tell you that I am accompanied by my cousin Miss Montgomerie, whom I believe you saw at Edinburgh, and she perhaps may and perhaps ought to prevent my Hibernian nuptials. You must know that she and I have always been in the greatest intimacy. I have proved her on a thousand occasions, and found her sensible, agreeable, and generous. When I was not in love with some one or other of my numerous flames, I have been in love with her; and during the intervals of all my passions Margaret has been constantly my mistress as well as my friend. Allow me to add that her person is to me the most desirable that I ever saw. Often have I thought of marrying her, and often told her so. But we talked of my wonderful inconstancy, were merry, and perhaps in two days after the most ardent professions to her I came and told her that I was desperately in love with another woman. Then she smiled, was my confidante, and in time I returned to herself. She is with all this, Temple, the most honest, undesigning creature that ever existed.

Back to Mrs. Boswell of Auchinleck’s Reel[edit]