Find traditional instrumental music
This is the stable version, checked on 4 September 2020.
Jump to: navigation, search

Back to Mrs. Dingwall of Brockly’s Strathspey

MRS. DINGWALL OF BROCKLY'S STRATHSPEY. Scottish, Strathspey. F Major. Standard tuning (fiddle). AAB. The strathspey may have been composed by Robert Petrie (1767-1830), although he did not claim it (as he other tunes) in his Fourth Collection (c. 1805). The melody was recorded in 1936 on a 78 RPM disc (Celtic 006) by Cape Breton fiddler Dan J. Campbell, one of the first recordings of Cape Breton fiddlers. Paul Stewart Cranford remarks that Campbell’s setting differs somewhat from the Skye Collection setting, and was picked by older Cape Breton players. The first and third measures of the first strain are identical to William Hardie's "New Brig o' Methlick (2) (The)."

Brucklay Castle [1] (a.k.a. Brucklay House), north of Maud, Aberdeenshire, is a 16th-century castle in the Buchan (New Deer) area of Aberdeenshire in Scotland, at one time the home of the Dingwall family. Mrs. Dingwall named in the title of the strathspey was Janet Morrison (1747-1831), who married in 1770 Arthur Fordyce Dingwall (1745-1834), a lawyer in Aberdeen and later judge and Commissary. Janet was the daughter of James Morison of Elsick, Lord Provost of Aberdeen and Isobell Dyce. The couple resided in Arthurseat, a house in Aberdeen. Local fiddler-composer William Christie also wrote tunes in her honor (see "Mrs. Dingwall of Brucklay's Reel" and "Mrs. Dingwall of Brucklay's Waltz"). 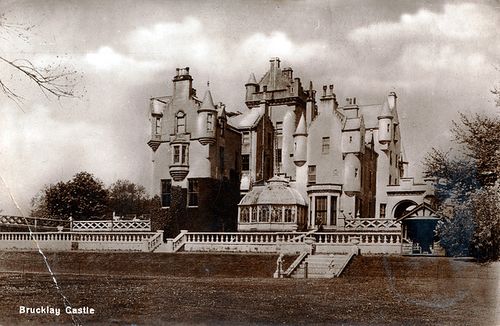 Brucklay Castle, after significant renovations in the mid-19th century. Unfortunately, the castle is largely now a ruin.

Back to Mrs. Dingwall of Brockly’s Strathspey