Back to Mrs. Ferguson of Raith's Strathspey (1)

MRS. FERGUSON OF RAITH('S STRATHSPEY) [1]. Scottish, Strathspey. F Major. Standard tuning (fiddle). AAB. The melody appears in Robert Petrie's 1st collection of c. 1790. The estate of Raith is near Kinkcaldy, Fife, and Raith House stands on a five-hundred-foot-high hilltop (reputed to have been the site of one of Macduff’s castles), with a commanding view of the Firth of Forth to the south. Mrs. Ferguson may have been Jane, daughter of Ronald Craufurd, of Restalrig (and sister of Margaret, Countess of Dumfries), who married William Ferguson of Raith (d. 1812). The family was one of painter Sir Henry Raeburn’s early patrons, and he produced several portraits for them (see Raeburn's protrait "William Ferguson and his son"). 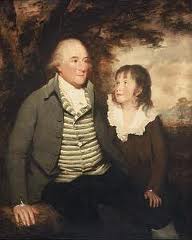 William Ferguson and his son. Raeburn.

Back to Mrs. Ferguson of Raith's Strathspey (1)