Find traditional instrumental music
This is the stable version, checked on 3 September 2020.
Jump to: navigation, search

Back to Mrs. Gordon of Cairness' Strathspey 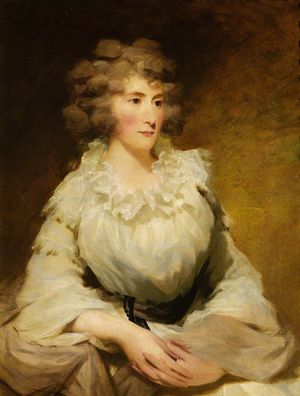 Mrs Charles Gordon, nee Christian Forbes of Ballogie, Wife of Charles Gordon of Buthlaw, Lonmay and Cairness. Sir Henry Raeburn, 1790.
MRS. GORDON OF CAIRNESS' STRATHSPEY. Scottish, Strathspey (whole time). A Major. Standard tuning (fiddle). AB. "Mrs. Gordon of Cairness" was composed by William Christie (1778-1840), a dancing master, postman, song collector and fiddler-composer of Cuminestown, Aberdeenshire. Cairness is a country house, originally part of a 9,000 acre estate, in Buchan, Aberdeenshire, near Fraserburgh, built by Charles Gordon in 1790 with profits from the Georgia estate, Trelawny, Jamaica, and the enslaved people on it. He visited the Jamaica holdings only briefly, and was an absentee partner. Mrs. Gordon, née Christian Forbes of Ballogie, who sat for a stunning portrait by Sir Henry Raeburn in 1790, died in 1801, and may or may not have been the subject of Christie's strathspey.

Charles's eldest son and successor, Major-General Thomas Gordon (1788–1841), 8th Laird of Buthlaw, and 2nd of Cairness, was a good friend of Lord Byron, and became a hero of the Greek War of Independence, writing a celebrated history of the conflict. In 1815 he traveled to again to Constantinople, where he married Barbara Kana, a lady of Armenian-Greek extraction (afterwards Baroness de Sedaiges). Gordon spent much of his life abroad, returning to Cairness briefly at points in his life, notably in 1814-1815, perhaps for a time prior to 1821 (the year he returned to Greece), 1827-1828 and at the end of his life. Gordon died at Cairness and was survived by his wife. He had no issue with her and in his will left most of his estate, including a large landholding in Jamaica, to an illegitimate son called Charles Wilkinson, who later took the surname Gordon. His existence seems to have been a secret from the rest of the family as he had been brought up by a tutor in Elgin. The inheritance caused much scandal and led to a long period of litigation within the family.

Christie would have been a young man (age 23) at the time of Christian's death in 1801, although it is still entirely possible the tune dates to that time. The publication date of his collection (1820) postdates General Gordon's marriage (1815) and predates his 1821 trip to Greece to participate in the Greek Revolution. It is possible he came into contact with the Gordons during the period 1815-1820, and composed this strathspey (one wonders what his Armenian-Greek spouse might have thought of it).

Back to Mrs. Gordon of Cairness' Strathspey