Back to Mrs. Graham of Ballgown's Reel 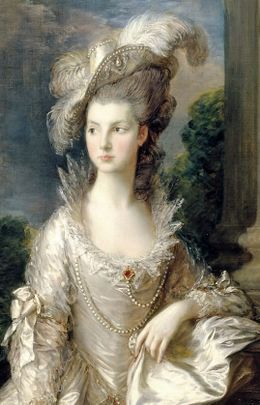 The Honourable Mrs. Graham, by Thomas Gainsborough, 1777
MRS. GRAHAM OF BALGOWAN'S REEL. AKA - "Mrs. Graham of Ballgown's Reel." Scottish, Reel. D Mixolydian. Standard tuning (fiddle). AABCCD. Composed by Daniel Dow, first printed in his collection c. 1775 (p. 8). It also was printed by the Gows and by Kirkmichael, Perthshire, fiddler and composer Robert Petrie (in his Second Collection of Strathspey Reels and Country Dances, 1796). The beautiful and amiable Mrs. Graham was Mary Cathcart, sister of Jane, the Duchess of Athole, a daughter of Lord Cathcart, and a sister to his successor. She married Thomas Graham of Balgowan, afterwards Lord Lynedoch, at age 16 in a double wedding with her older sister Jane, who married John Murray, 4th Duke of Atholl. Gainsborough painted her portrait three times, producing most famously "The Honourable Mrs. Graham" in 1777, a few years after her marriage to Thomas. She died in 1794, although Thomas survived until 1843 (and hailed as the hero of Barossa).

Back to Mrs. Graham of Ballgown's Reel