Find traditional instrumental music
This is the stable version, checked on 1 April 2020.
Jump to: navigation, search

Back to Mrs. Gun Monro of Poyntzfield's Fancy

MRS. GUN MONRO OF POYNTZFIELD'S FANCY. Scottish, Country Dance Tune (4/4 time). G Major. Standard tuning (fiddle). AAB. The tune was published by the Edinburgh music publishing firm of Nathaniel Gow and William Shepherd in a volume entitled A Collection of Entirely Original Strathspey Reels, Marches, Quick Steps &c., "by Ladies resident in a remote part of the Highlands of Scotland, as corrected by Nath. Gow." Unfortunately, the composers names are not given. The Leeds antiquarian Frank Kidson (1854–1926) penciled a note in his copy of the volume that the composers were, or included, “the Misses Whyte,” and modern researcher Charles Gore thinks “the Misses Whyte” may possibly be a Miss White and a Miss Brockly, of Morayshire, east Highlands. 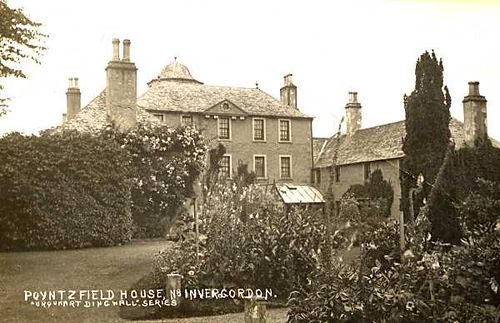 Poyntzfield was the estate of Sir George Gun Monro (1717–1785). It was built in the early 1700s and extended on several occasions later. The Georgian mansion was originally called Ardoch House but changed names with the marriage of Sir George Gunn Munro to the Anglo-Dutch Miss Jemima Poyntz, who is presumably the "Mrs. Monro" of the tune title. Her wealth not only saved the laird, but allowed Ardoch House to be rebuilt in the Dutch manner, which was then renamed Poyntzfield in her honor. The tower on the top of the house is named Jemima's tower after Jemima. The nearby village, Jemimaville, located on Udale Bay, an inlet on the south side of the Cromarty Firth, also took its name from the English heiress. Jemima's name is sometimes recorded as Charlotte Poyntz, who was a Maid-of-Honor to Queen Caroline. She was married to Mr. Hyde and was widowed before she married Sir George. She was the daughter of the Right Hon. Stephen Poyntz, Privy Councillor, Cowdray House, Sussex.

Back to Mrs. Gun Monro of Poyntzfield's Fancy