Back to Mrs. Hamilton of Sundrum's (Junr.) Reel

MRS. HAMILTON of SUNDRUM'S (JUNR.) REEL. Scottish, Reel (whole time). A Minor. Standard tuning (fiddle). AAB. Composed by fiddler-composer John French (1752–1803). It appears in his A Collection of New Strathspeys, Reels &c. (c. 1801), dedicated to Mrs. Boswell of Auchinleck, and published by Gow & Shepherd, “for behoof of Mr. French’s widow and children.” The phrase may indicate that French was incapacitated, or perhaps dead, in which case either the dates of publication of the dates of his death are faulty. 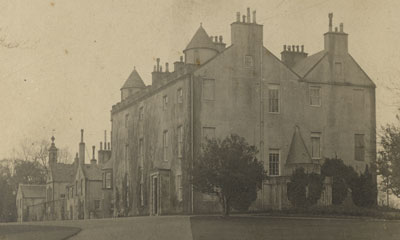 Sundrum, c. 1920
The title probably honors Lillias Montgomery, sister to the 12th Earl of Eglinton, who married John Hamilton (1739–1821) of Sundrum, a merchant and agricultural improver. Sundrum House was an estate near the town of Ayr, Scotland, that inocorporates an ancient tower that makes it amongst the oldest inhabited castles of Scotland. It was John Hamilton that assisted William Burns, the father of poet Roberty Burns, in his disupute over debts to his landlord. Unfortunately, Hamilton merchant and agricultural improving were not confined to Ayrshire, as he had estates in Jamaica and was a slave owner (as were his descendents). Jean Acheson ("Servants in Ayrshire 1750–1914", p. 15 in Ayrshire Monographs No 26) records:

In the village of Joppa on the main road from Ayr to Cumnock there were at one time a number of Negroes brought from the plantations in West Indies, belonging to John Hamilton of Sundrum. They intermarriedwith the local inhabitants, and traces of Negro in the hair and countenance could be observed for some generations.

Back to Mrs. Hamilton of Sundrum's (Junr.) Reel