Find traditional instrumental music
This is the stable version, checked on 10 December 2020.
Jump to: navigation, search

Back to Mrs. Macleod of Macleod's Strathspey 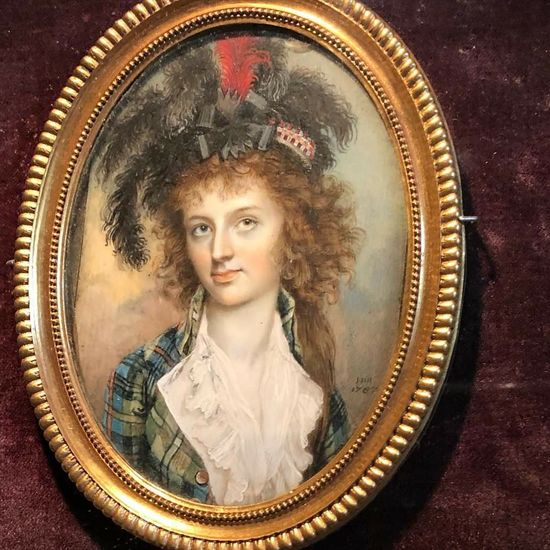 Sarah MacLeod (née Stackhouse). c. 1787, in tartan of the MacLeods, fashioned into a riding habit.
MRS. MACLEOD OF MACLEOD'S STRATHSPEY. Scottish, Strathspey (whole time). G Minor. Standard tuning (fiddle). AB. At the time of publication of Edinburgh fiddler-composer Robert Mackintosh's (c. 1745-1808) Fourth Collection of New Strathspey Reels (c. 1804) the head of Clan MacLeod was John Norman MacLeod of MacLeod (1788–1835), the 24th chief of Clan MacLeod, who had succeeded his father, Norman MacLeod (1754-1801), the 23rd chief of Clan MacLeod, Dunvegan, Isle of Skye. However, John Norman did not marry his wife Anne Stephenson until 1809 and thus she is not the person of the tune title. Mackintosh may have composed the tune for one of the two wives of Norman MacLeod (23rd of MacLeod), who married at Inverness firstly Mary Mackenzie of Suddie (died in 1784 in Marseille, France). His second wife (and likely person of Mackintosh's title) was Sarah Stackhouse (1766-1822), daughter of Nathaniel Stackhouse, a Member of the Council at Bombay. born in India and considered one of the great beauties of the era). Norman had a daughter and a son by his first marriage, and three daughters and a son by his second.

Norman entertained Samuel Johnson and Boswell at Dunvegan on their tour of Scotland, but he was a solider and was stationed overseas for considerable periods. Later in life he also served for a time as an MP where he was one of the early campaigners (1796) to abolish the slave trade. He fought in America during the War for Independence with the 71st Regiment, going there with his first wife, Mary; they were captured by General Washington but kindly treated and eventually paroled to England. He later saw service in India at Madras in 1782 and fought a campaign against Tippoo, taking the fortress of Bednore in 1783. He was promoted to Brigadier General and returned to England in 1789. Two incidents scarred him for life: the death of Mary, and an accusation that he embezzled money while serving in India. He turned to drink, ruining his health, and died at Guernsey where he was preparing to take a voyage.

Back to Mrs. Macleod of Macleod's Strathspey