Back to Mulberry Garden (The)[edit]

MULBERRY GARDEN, THE. AKA and see "Maid in the Mill (1) (The)." English, Country Dance Tune (6/4 or 6/8 time). D Minor. Standard tuning (fiddle). AB. The melody dates to 1675 when it appeared in John Playford's Dancing Master, 5th edition, as a longways dance, "for as many as will." It enjoyed remarkable longevity in the long-running series, and was retained in each subsequent edition, through the 18th and final edition printed in 1728 by John Young (who was heir to the Playford publishing concerns in London). "The Mulberry Garden" also was printed by John Walsh in his The Compleat Country Dancing-Master (London, 1731).

The mulberry is not native to the British Isles, but rather was an import from Asia. Nevertheless, it has a long history in England, and it is considered probably that it was introduced by the Romans, who imported it from Italy for the soldiers' use (the mulberry was apparently considered much more savory then than now). It is definitely known that mulberry trees were cultivated on the island since the early part of the 16th century, especially those of Syon House, Brentford, said to have been introduced from Persia in 1548. Mulberry cultivation was given a huge boost in 1608 by King James I, who was anxious to further the silk industry by introducing the culture of the silkworm into Britain, in imitation of China where the silkworm feeds on mulberry leaves. He not only issued an edict encouraging the cultivation of mulberry trees but he also planted largely himself, and directed payments to:

Master William Stallinge of the sum of £935 for the charge of 4 acres of land taken in for His Majesty's use, near to his Palace of Westminster, for the planting of Mulberry trees, together with the charge of walling, leveling, and planting thereof with Mulberry trees.

King James gave by patent to Walter, Lord Aston, the superintendence of "the Mulberry Garden, near St. James's." Unfortunately, the king's scheme for a silk industry in Britain came to naught, being undone by a simple yet fatal mistake. The silkworm eats the leaves of the white mulberry, and the tree imported to nourish the royal plan was the black mulberry, entirely inedible to the insect. The lasting effect of the plan, however, was to render planting the mulberry fashionable in imitation of the royal garden, "and there is scarcely an old garden or gentleman's seat throughout the country, which can be traced back to the 17th century, in which a Mulberry tree is not to be found." Shakespeare had a famous mulberry tree, said to have been taken from the garden of James I, and planted in his own garden at New Place, Stratford-on-Avon, in 1609. 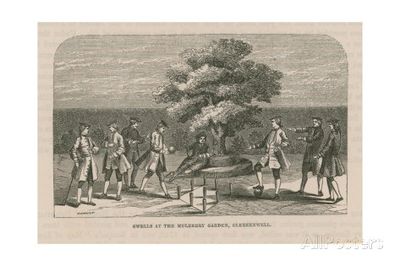 Swells at the Mulberry Garden, Clerkenwell

Instead of an industry, the Mulberry Garden at Buckingham became a fashionable place to go and to be seen; a pleasure garden, particularly in the time of Charles I and Charles II. It is this same plantation that became the Mulberry Garden referred to by period dramatists, and is probably the subject of Playford's title. Sir Charles Sedley, for example, wrote his play The Mulberry Garden in 1668, just prior to Playford's publication of the tune. Graham Christian (2015) suggests that Playford wanted to capitalize on a connection to Sedley's play, and that one of his songs, "Ah Cloris! That i now could sit" was sung to the tune. The site of the garden is on the private grounds of Buckingham Palace, and one lone tree yet exists from James's planting so long ago [1].

John Evelyn described it in 1654 as "the best place about the towne for persons of the best quality to be exceedingly cheated at;" and diarist Samuel Pepys jotted that it was "a silly place, with a wilderness somewhat pretty." The garden was said to have been a favorite resort of John Dryden, where he used to eat mulberry tarts. The dramatist was said to hie there with his favorite actress, Mrs. Reeve. "I remember," writes a correspondent of the Gentleman's Magazine for 1745, "plain John Dryden, before he paid his court with success to the great, in one uniform clothing of Norwich drugget. I have ate tarts with him and Madame Reeve at the Mulberry Garden, when our author advanced to a sword and a Chadreux wig."


Recorded sources: Dorian 90238, The Baltimore Consort - "A Trip to Killburn."

Back to Mulberry Garden (The)[edit]