Find traditional instrumental music
This is the stable version, checked on 7 June 2019.
Jump to: navigation, search

MURTHLY CASTLE. Scottish, Reel. D Major. Standard tuning (fiddle). AABB'. Composed by Aberdeenshire fiddle-composer Alexander Walker. Murthly Castle is located Birnam on the River Tay, south of Dunkeld and north of the city of Perth in Perth and Kinross. The original Murthly Castle dated from the 15th century, and the estate of Murthly was built around it, acquired by Sir William Stewart of Grandtully in 1615. A new castle was built by Sir John Stewart in 1827-32, but although the outside was completed it was never internally finished. 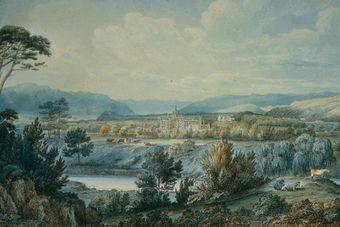 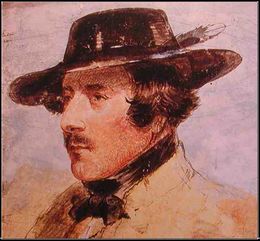 The estate was then inherited by his brother, Sir William Drummond Stewart, who had been an officer in the Napoleonic Wars, serving in the Peninsular Wars, but who was reduced with his unit some years after hostilities concluded. Still thiristing for adventure, he sailed for America, and joined an expedition to the lightly-explored America West during the time of the Mountain Men, between 1833 and 1839. Sir William eventually returned to Murthy, bringing with him two Native Americans (who were ensconced in an out-building on the estate) and the beginnings of a herd of American Bison, or Buffalo. 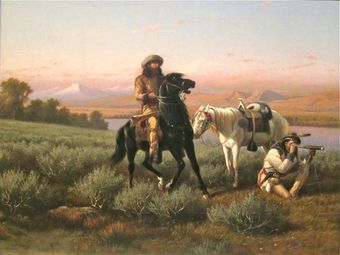 Jim Bridger with Sir William Drummon Stewart. Painted by Wm. de la Montagne Carey in 1872 (some 40 years after the event may have occurred)