MUSCATATUCK WALTZ. American, Waltz. USA, Indiana. F Major. Standard tuning (fiddle). The waltz is named for a river in southern Indiana. The waltz was said to have been in the repertoire of Eldon Baker & His Brown County Revelers, a group with Kentucky roots regionally popular in the 1930's. 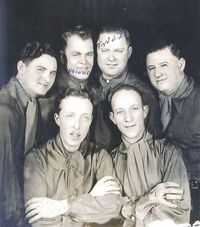 The band broadcast regularly on powerful radio station WLW, Indianapolis, Indiana, at a time when there was a prohibition for the station's acts to record commercially. When they broke that unwritten rule to record some 20 sides for the Vocalion label the group soon found themselves out of a job. However, "Muscatatuck Waltz" is not among their Vocalion recordings.