Back to Mutt and Jeff[edit]

MUTT AND JEFF. Old-Time, Breakdown. D Major ('A' part) & A Major ('B' part). Standard tuning (fiddle). AABB. Mutt and Jeff was a cartoon from the early days of film, dating to 1916, and the longest running theatrical animated short series of the silent era, lasting until 1926. It featured two miss-matched characters, one tall and lanky and the other shorter and spunky, from which the phrase "mutt and jeff" was coined to denote miss-matched pairs. 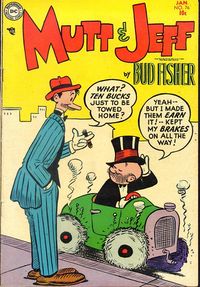 The title was perhaps inspired by the fact that each strain of the tune is in a different key. While this combination is fairly common in many traditions, particularly for quadrilles, it is not common in the Appalachian South.

Back to Mutt and Jeff[edit]