Back to My Dungannon Sweetheart[edit]

MY DUNGANNON SWEETHEART. Canadian, Jig. D Major. Standard tuning (fiddle). AA'BB'. Composed by the late Ontario fiddler Graham Townsend [1] (1942-1998) for his wife Eleanor, also a championship fiddler. The couple died within a month of each other. It was originally composed in the key of 'C' major. 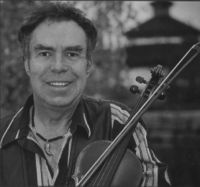 Back to My Dungannon Sweetheart[edit]