My First Night in America

Back to My First Night in America[edit]

MY FIRST NIGHT IN AMERICA. Irish, Double Jig. G Major. Standard tuning (fiddle). AABB. The jig was first recorded in 1929 by Dan Sullivan's Shamrock Band, in New York for Victor Records, in a medley as the tune following "Tobin's Favorite." 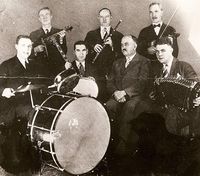 
See also listing at:
Hear the tune played on tin whistle on youtube.com [1]

Back to My First Night in America[edit]