Back to My Jo Janet

MY JO JANET. AKA and see "Long or ony Old Man," "Reuben." Scottish, Air (whole or cut time). C Major (Howe): D Major (McGibbon, Thomson). Standard tuning (fiddle). AB (Howe, Thomson): AABB (McGibbon). The earliest form of the tune (with an anonymous lyric) appears in old lute manuscripts such as the Skene (c. 1615-20, as "Long or ony Old Man") and Rowallan (c. 1612-28). Emmerson (1972) groups this ballad with other anonymous lyrics from the 17th century (such as "Muirland Willie," "The Barrin' o the Door," and "The Wowing of Jok and Jynny") which "add considerably to our knowledge of the habits and outlook of these times." The old song was adapted by Allen Ramsay, and published in his Tea Table Miscellany; or, Wit and Mirth (1724). Composer Franz Joseph Haydn (1732 - 1809) composed a setting of the song, which begins: 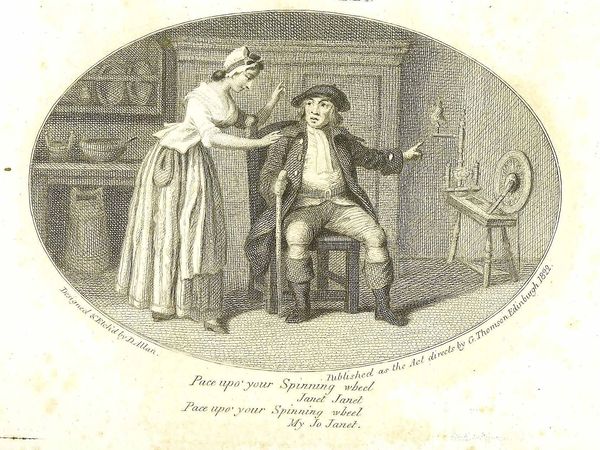 Sweet Sir, for your courtesie,
When ye come by the Bass, then,
For the love ye bear to me,
Buy me a keeking glass, then.
Keek into the draw-well,
Janet, Janet;
And there ye'll see your bonny sel',
My jo, Janet.

The song also appears in James Johnson's Scotch Musical Museum (1788), reworked by Burns, with most of the verses intact, save for the last, whose suggestiveness the publisher found contrary to his senseabilites:

My spinning wheel is auld and stiff,
The rock o't winna stand, Sir;
To keep the temper-pin in tiff,
Employs right aft my hand, Sir.
Make the best o' that ye can,
Janet, Janet;
But like it never wale a man,
My jo Janet.


Back to My Jo Janet