Back to My Old Kentucky Home[edit]

MY OLD KENTUCKY HOME. American, "Sand Jig" (4/4 time). G Major. Standard tuning (fiddle). AABB'. The setting published by Kerr in the 1880's is a dance setting of the song air composed in 1852 by American songwriter Stephen Foster (1826-1864). It was written for the minstrel stage, and performed by Christy's Minstrels the year it was published (with whom Foster was under contract to provide material). Foster is said to have been influenced by Harriett Beecher Stowe's novel Uncle Tom's Cabin. It was eventually adopted by the state of Kentucky as its official song. 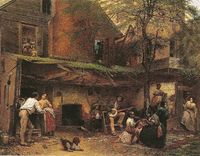 Negro Life at the South, by Eastman Johnson. The painting is popularly known as Old Kentucky Home

Back to My Old Kentucky Home[edit]