NANCY [3]. AKA – "Nancy Clough," "Nancy's March." English, March. England, Northumberland. D Major. Standard tuning (fiddle). AABBCCDD. Composed by Borders (Northumberland) musician Tom Clough [1] (1881–1964) in the 1930's, who played the Northumbrian small pipes. Several stories are associated with the tune: the first has it that the music is supposed to depict Tom's first wife Nancy tripping up and down the stairs. A second is that a squeaky wheelbarrow was the inspiration for the melody, and finally it has been said to have been written for a favourite sheep. The tune is a variation of "My Love is but a Lassie Yet (1)." Clough was a member of a Northumbrian family with a musical tradition that stretched back some 250 years. His playing has been described as crisp, staccato and highly rhythmic. He was active in the Northumbrian Pipers Society, and was one of the first Northumbrian pipers to be recorded. 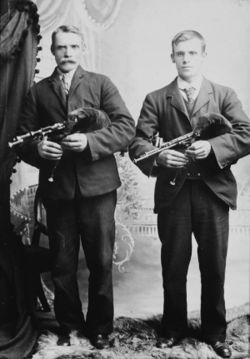 Henry and son Thomas Clough
Paul Mitchell finds an almost identical tune in the late West Virginia fiddler Wilson Douglas's repertoire, called "Fair Mountain Hornpipe." A more direct adaptation of Clough's "Nancy" is the American clawhammer banjo version of the same tune popularlized by Howie Bursen and Ken Perlman, who were familiar with the several British recordings of the tune (in particular the High Level Ranters' version). It has by now taken on a life of its own in modern "revival" banjo tradition, and its Northumbrian source is frequently unrecognized. 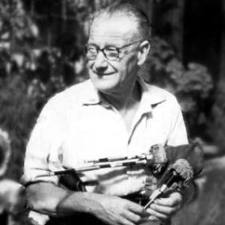