NANCY DALTON. AKA - "Nancy Dawson (2)." Old-Time, Breakdown. USA, Kentucky. D Major. Standard or ADae (Monday/Titon) tunings (fiddle). AABB. The tune was in the repertoire of Monroe County, south-central Kentucky, fiddler Jim Bowles (1903-1997) who learned it from local musicians. Fiddlers Isham Monday (1879-1964) and Sammie Walker (1910-1987), both of whom were also from Monroe County, played the tune and called it "Nancy Dawson;" (Monday's 1959 field recording is in the Western Kentucky University archive). As a variant of a larger tune family, it was not widely known outside the Monroe County region, however, Jeff Titon (2001) identifies it as a member of the "Old Dubuque" family of tunes which is more widespread. Of the three performances, Monday's is the most archaic sounding, followed by Bowles's version; the youngest member of the trio, Sammie Walker, had a version markedly more influenced by more modern styles of fiddling. The family includes "Dubuque," "Hell Up Coal Holler (2)," "Old Dubuque" and "Duck River" (see notes for those tunes). 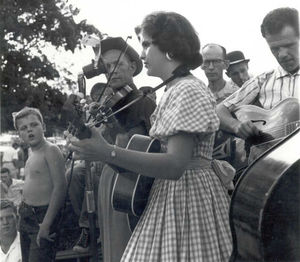 Pat Kingery and the Kentuckians. Iola Weaver, vocal and guitar.