Find traditional instrumental music
This is the stable version, checked on 26 September 2021.
Jump to: navigation, search

Back to Nancy Dawson (1)

NANCY DAWSON [1]. AKA – "Nancy Dawson's Hornpipe." AKA and see "Here we go gathering nuts in May," "Here we go round the Mulberry Bush," "I saw three ships come sailing in," "Miss Dawson's Hornpipe," "Piss on the Grass," "Piso ar y Gwair," "Scottish Perrigordien," "Sixieme Anglaise de la Reine." Scottish, Irish, English; Air, Country Dance Tune (6/8 time), Single Jig or Morris Jig. England; North-West and Northumberland. B Flat Major (Gow): G Major (most versions). Standard tuning (fiddle). AB (Chappell, Emmerson): AAB (Gow): AABB (most versions). "Very old" (Gow). This well-known dance tune appeared in performances of John Gay's ballad opera The Beggar's Opera (1729) where it was labelled a hornpipe, although it must be noted that any step-dance at the time could be called a "hornpipe." The air also appears in the operas Love in a Village (1762, as a housemaid's song), Midas (1764) and The Spanish Lady (1765), among others. Concurrently, it was to be found in many country dance collections such as [David] Rutherford's Compleat Collection of 200 country Dances, vol. 2 (1760, p. 13, as "Miss Dawson's Hornpipe"), the [James] Gillespie Manuscript of Perth, 1767). In J. Walsh's Caledonian Country Dances (book iii, p. 36, 1744) and MWA 200 Country Dances (c. 1740) it appears under the earthy title "Piss on the Grass." It was also printed in Peter Thompson's Compleat Tutor for the Flute, c. 1750–54. 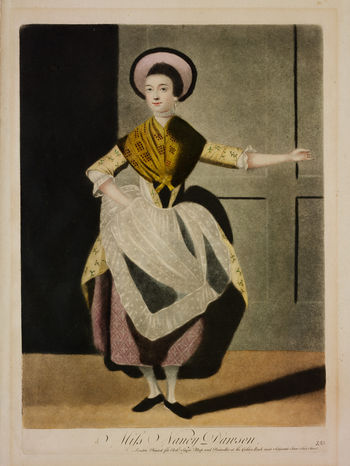 The later "Nancy Dawson" designation for the melody derives from the name of a stage dancer of great popularity, Nancy Dawson (1728–1767), who performed to the tune in England during the 1760's. A coffee-house performer, Miss Dawson came to wide public attention through her dancing at Sadler's Wells (although she did not appear on the stage until she was 29 years old), but gained renown in 1759 by dancing a solo rendition of the tune, a hornpipe, between the acts in a Covent Garden, London, revival of John Gay's The Beggar's Opera in 1759. She immediately became a genuine celebrity and was celebrated in popular song and country dance. Little is known about her: Kidson says she is said to have been the wife of a publican at Kelso; elsewhere it is given that her father was a poster in Clare Market. A period publication called the Dramatic History of Master Edward, Miss Ann and Others, states she was "extremely agreeable in her figure, and grew to be a great favorite of the town...she became vastly celebrated, admired, imitated and followed by everybody." It is also said she was a charitable person, admired for her good qualities as much as for her performances. Nancy died May 27, 1767, and was buried in the churchyard of St George's-in-the-Fields (also given as the Chapel of St. George the Martyr, Queen Square, Bloomsbury). 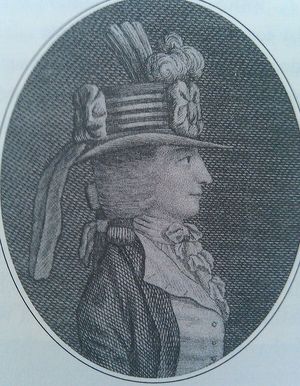 A song in eulogy of her was written and published in half-sheet music and in Thompson's Collection of Hornpipes, issued about this date, and the air is called "Miss Dawson's Hornpipe." At a later period Thompson published other airs used by Miss Dawson, under the titles "Miss Dawson's New Hornpipe" and "Miss Dawson's Fancy," but none attained the popularity of the original hornpipe bearing her name. There is one report that a verse from the eulogy song is said to have been cut on her tombstone, but was obliterated by order of the vicar. This may be so, as it is said that her tombstone how reads only "Here lies Nancy Dawson," a stark phrase that begs a following couplet. A single-sheet folio printed in London in 1760 sets the tune to a song in praise of the performer[1]:

Of all the girls in our town,
The red, the black, the fair, the brown,
That dance and prance it up and down,
There's none like Nancy Dawson. etc.

Her easy mien, her shape so neat,
She foots, she trips, she looks so sweet;
Her every motion's so complete,
I die for Nancy Dawson.

Several of her portraits exist. A period likeness of Nancy Dawson portrayed in a dance pose is in the Dance Collection of the New York Public Library. Another, is in Dr. Burney's Collection of Theatrical Portraits in the British Museum. Her likeness (as well as an excellent article) also appears at the South Riding Folk Network website.

In the years following Nancy's celebrity the melody appeared in many collections as a country dance, including a French publication of c. 1785 in which it appears under the title "Sixieme Anglaise de la Reine." In the North-West England morris tradition the melody is used for a single step dance. The tune is contained twice in the music manuscript collection of local dancing master and musician John Winder (Lancashire, c. 1789, once in 2/4 time and once in 6/8 time), and in the 19th century Joseph Kershaw Manuscript. Kershaw was a fiddle player who lived in the remote area of Slackcote, Saddleworth, North West England, who compiled his manuscript from 1820 onwards, according to Jamie Knowles. American appearances of the tune may be found in a number of manuscripts, including Giles Gibbs' fife MS. made in New Windsor, Ellington Parish, Connecticut, in 1777. Greenland, New Hampshire, native Clement Weeks copied directions for a dance to the tune in his 1783 MS collection of dances. It also appears in the music copybook of Henry Livingston, Jr., who purchased the estate of Locust Grove, Poughkeepsie, New York, in 1771 at the age of 23. In 1775 Livingston was a Major in the 3rd New York Regiment, which participated in Montgomery's invasion of Canada in a failed attempt to wrest Montreal from British control. An important land-owner in the Hudson Valley, and a member of the powerful Livingston family, Henry was also a surveyor and real estate speculator, an illustrator and map-maker, and a Justice of the Peace for Dutchess County. He was also a poet and musician, and presumably a dancer, as he was elected a Manager for the New York Assembly's dancing season of 1774–1775, along with his 3rd cousin, John Jay, later U.S. Chief Justice of Governor of New York. The melody was also entered into the mid-19th century music manuscript collection of uilleann piper and Church of Ireland cleric James Goodman [1].

Nancy Dawson survives in a mother-goose rhyme and a 'ring game', "Here we go round the Mulberry Bush":

Back to Nancy Dawson (1)