Find traditional instrumental music
This is the stable version, checked on 13 January 2021.
Jump to: navigation, search

Back to Nancy Rowland (1) 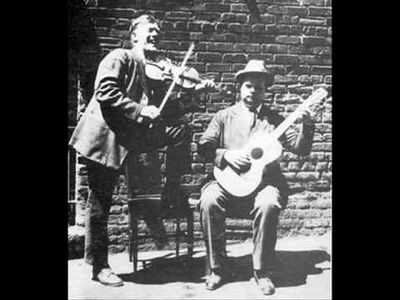 North Georgia musicians and entertainers Gid Tanner and Riley Puckett
rendition was played by John Carson on a mid-1920's OKeh recording (#40238, as "Nancy Rollin"), but Carson's version may also be classed as a separate tune. The north Georgia band the Skillet Lickers recorded the tune (as "Nancy Rollin") in Atlanta for Columbia Records in October, 1928. Their changing lineup consisted, at the time, of banjo player Fate Norris, guitarist Riley Puckett with Clayton McMichen, Gid Tanner and (possibly) Lowe Stokes on fiddle. McMichen, probably the most talented musician in the band, asserted himself, and the billing on the record label was changed from Gid Tanner and His Skillet Lickers with Riley Puckett to Gid Tanner and His Skillet Lickers with Riley Puckett and Clayton McMichen. A much anthologized recording by the Mississippi string band Carter Brothers and Son was originally recorded in November, 1928, for Brunswick Records (released on the Vocalion label). The group was a family band from Monroe County, headed by scion George Carter, lead fiddler, who was near aged sixty at the time. He was accompanied on second fiddle by his brother Andrew. 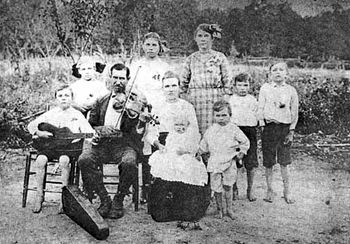 The following (floating) ditties are sometimes sung to the tune:

Had a little dog, his name was Rover,
When he died, he died all over.

I had a wife and she was a Quaker,
She wouldn't work and I wouldn't make her.

I had a wife and she was a weaver,
She wouldn't work, so I had to leave her.

The tune is mentioned in a passage in Missouri physician William Percival King's Stories of a Country Doctor (1891), in his chapter called "Old Time Dances and Parties." After a community barn-raising...:

...the young men would repair to the house in the dusk of evening. If the quilt was done it would be taken out of the frames; if not it would be wound up--that is lifted to the ceiling or "loft," and then securely tied overhead. If there was a bed in the "big room" it would be taken down and removed. The fiddlers would get ready while everybody ate a hasty supper. This evening meal was enjoyed most by the old folks, for the younger ones would be so elated with the prospect of what was to come they could not eat. The "fiddlers" (there were no violinists in those days) would take their places i the corner and begin to "tune up." Four young men would seek partners and take their places for a cotillion. Then the fiddlers would strike up a familiar strain and the dancing would begin."
And it was dancing.
None of your gliding and sliding to and fro, a little hugging here and there, touching the tips of fingers and bowing and scraping. Oh, no. This was dancing. The music was such as "Fishers," "Durangs," "Rickett's," and "The Sailor's" hornpipes, "The Arkansas Traveler," "Cotton Eyed Joe," "Nancy Rowland," "Great big 'taters in sandy land," "Pouring soapsuds over the fence," "The snow bird on the Ash bank," "The Route," "The Rye Straw," "Run, nigger, run," etc. Sometimes one of the fiddlers would act as "prompter," or, if he could not, then some one would be selected. ... [pp. 48-49].

Ohio fiddler Lonnie Seymour's "Sugar Barrel" is a related tune. "Nancy Rowland" was also in the repertoire of fiddler Tommy Magness (1911-1972), born in north Georgia near the southeastern Tennessee border, and West Coast mandolinist Kenny Hall. The title appears (as "Nancy Rowland" and "Nancy Rollins") in a list of traditional Ozarks Mountains fiddle tunes compiled by musicologist/folklorist Vance Randolph (1892-1957), published in 1954, and Randolph said it was a well-known dance tune. However, said Randolph, "Nancy Rollin" was also the name of a bawdy song, for which he was not able to obtain the words to. Fiddler Lon Jordon (born c. 1876) of Framingham, Arkansas, told the folklorist a story about it in 1948 during a visit, printed in Randolph's book Blow the Candle Out[1]:

About forty years ago," said Jordan, "a prominent citizen at Harrison got drunk, and sung that song. He took off his clothes and acted it all out, right there in the street. He had a tool like a jackass, and when he come to the verse about how Nancy was a-coming, he shuck his old prick at the womenfolks. There was a big scandal about it. He was a well-to-do man, but he died a pauper. A fine feller too, that never done anything out of the way except when he got drunk.

See also listing at :
Jane Keefer's Folk Music Index: An Index to Recorded Sources [1]
Hear the Carter Brothers and Son recording [2] [3]
Hear the Skillet Lickers 1929 recording at Slippery Hill [4] and on youtube.com [5]
Hear a slow version for learning at the Fiddle Club of the World [6]
See banjo tab by Ken Torke [7]

Back to Nancy Rowland (1)