Back to Napoleon's Coronation March

NAPOLEON'S CORONATION MARCH. G Major. Standard tuning (fiddle). One part. Jean-François LeSueur [1] (1760-1837), "Performed for the first time on Sunday, 2 December, 1804." Composer LeSueur was the music director at Napoleon and Josephine's coronation ceremony and composed several marches and motets for the event. The royal couple mounted the steps to the entrance to Notre-Dame where they were sprinkled them with holy water, then entered the church to the sound of LeSueur's coronation march. He boasted in 1837 that the music performed at the coronation was an oratorio he had written, but there is no evidence that he ever produced such a work. His "Marche du sacre" (Coronation March) was to be re-used for the coronation of Charles X. 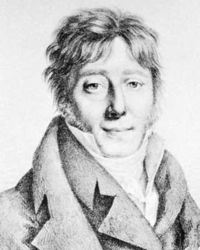 LeSueur was a native of Abbeville, and the son of poor peasants and a self-taught musician and composer. He had a penchant for martial music, and was a favorite of Napoleon's (who, after the debut of his opera The Bards, received a gold snuff-box inscribed, "From the Emperor to the author of 'The Bards'"--inside were 6,000 francs in notes). He was one of the founders of the Conservatoire of Music in Paris. He died in Paris at an advanced age, universally respected and admired.

The march was entered (as "Buonapart's Coronation March") in the c. 1850 music manuscript collection of Lake District musician William Irwin.

Back to Napoleon's Coronation March