Back to Napoleon's Farewell to Paris[edit]

NAPOLEON'S FAREWELL TO PARIS. Irish, Scottish, English; Air. An 18th century broadside ballad that musicologist William Chappell remarked was "one of the most common street ballad tunes of London, to which numberless songs have been sung at various times." Variants of words and music have been collected in Ireland, Britain, North America, and Australia; Lucy Broadwood and Alex Fuller Maitland collected a version from a gamekeeper at Lyne, Sussex, in 1893. Several different tunes have been the vehicle for the words including tunes that have also been employed for "Grand Conversation of Napoleon (The)," "Bold Sportsman (The)," "Carpenter's March," "Pratie Apples," "McKenna's Dream," "Under the Rose (1)," "Captain Rock(e's) [1]," "Greenfields of America (1)," "Miss Wedderburn's Reel) (1)," "Old Mother Flanagan," "Molly Brallaghan (1)."

Words to the song begin: 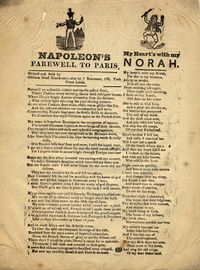 Farewell ye splendid citadel, metropolis called Paris,
Where Phoebus every morning shot four refulgent beams;
Where Flora's bright aurora advancing from the horizon,
His radiant light adorning the clear and shining streams.
That eve when censure does retire while the ocean glows like fire,
And the universe admires our merchandise and store;
Commending Flora's fragrance, the fertile fields to decorate,
To illuminate that royal Corsican again on the French shore.

As the Ballad Index points out, some of the rather less common words in the lyric presented challenges for oral transmission. For example, the first line in one version goes: "Farewell ye splendid city dell".

Back to Napoleon's Farewell to Paris[edit]